In 2022, JCF presented the 7th Annual Owl Give Award at our annual Ping Pong Ball on Thursday, November 9th. This award offers patients, families and other members of the community an opportunity to honor NICU team members everywhere by entering them to win an all-expense paid vacation.

We received a number of heartwarming nominations highlighting incredible NICU team members and, after much deliberation, we named our 7th Annual Owl Give Award Winner: Jody Schaaf 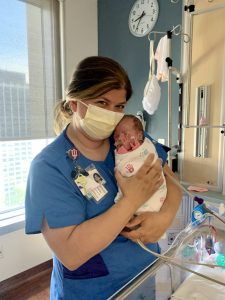 “Even on days when Jody was the charge nurse and not directly caring for Mary Jo, she still somehow managed to find time to come by and check on her. Many of these days included her working 16-hour shifts. She never complained and had the same consistent positive energy and her signature infectious laugh. During the time that we were in the NICU, Jody’s father sadly passed away. We never expected to hear from Jody as she had many things to attend to during that time. However, Jody continued to check on Mary Jo while she was gone from work and grieving the loss of her dad. Although she was not scheduled to work on the day Mary Jo was discharged, as we walked out of the hospital with our daughter, Jody was standing with her family waiting to give Mary Jo a hug goodbye. I still get tears in my eyes any time I think about this or tell the story to someone else. I can’t explain it, but I will try. Picture leaving your very vulnerable 3-pound newborn baby hooked up to all kinds of medical equipment with perfect strangers. It just doesn’t even seem natural. But you really have no choice, and so you just hope and pray that someone will care as much about your baby as you do – you know no one else is their mom so no one can love them like you do. But you just hope and pray they will care. In Jody, I found more than an answer to my prayer. She not only cared for Mary Jo – she really loved her. There isn’t anything more a mother’s heart could want.”⁠ 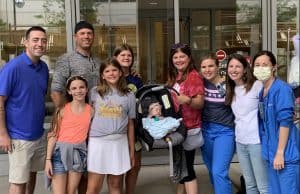 “Earlier this year, on a Monday morning, I found myself with my daughter in the neonatal intensive care unit at Northwestern Hospital. Mary Jo, barely 3 pounds, was a day old. This was not how we expected things to go. Unfamiliar hospital personnel were coming in and out of Mary Jo’s room that rainy morning; I remember this very clearly. Praying my rosary and staying out of their way seemed to make the most sense. It was at this most uncertain time, while my wife was still recovering from emergency cesarean surgery, that a nurse quietly walked into Mary Jo’s room and introduced herself to me. Her name was Jody Schaff. As I would come to find out with all of the special people who work in the Northwestern NICU, Jody’s commitment to our daughter was unwavering. Mary Jo’s path to recovery began with this hardworking and unassuming nurse from northwest Indiana. Over the course of the next 97 unpredictable days, Jody was at my daughter’s side comforting her like a mother during her most challenging moments. As kind as she was, it was also apparent that Jody’s opinion was sought out regularly by both her peers and the doctors alike. As a father sitting in the NICU watching everything, you have no idea how comforting it was to know we had such a well-respected all-star nurse (coach) taking care of our daughter each day. What I did not expect was how much this nurse ended up taking care of me on this journey too. After my daughter’s admission at the NICU, I convinced myself that I was going to take off work and be at the NICU with Mary Jo until she came home. I floated this idea by Jody and, without hesitation, she encouraged me to return to work and to concentrate on taking care of myself so I would be prepared to take care of Mary Jo when she came home. Spoken with such conviction, she was confident this was the right course and reassured me that she and her colleagues were going to take care of Mary Jo. Being away from Mary Jo for more than five minutes while she was in intensive care was an emotional crossroads for me. Still, this nurse was different and I really trusted her opinion. I, like the doctors I observed daily, followed her direction too and ended up returning to work. With this plan in place, I was still able to be at the hospital daily while still taking care of my responsibilities at work. When Mary Jo did come home, as Jody predicted I was in a much better place to take care of my daughter. As a father with three more children at home, please know that my wife and I quite literally trust Jody with our daughter’s life. Jody has become a member of our family. Please, please strongly consider her for this award. She is so deserving of the Jackson Chance Owl Give Award.”

We connected with Jody to learn more about her time working as a NICU nurse and her experience participating in our Owl Give Award contest. Check out our interview below.

JCF: Tell us a little about you. How long have you been a NICU nurse?
JODY: My name is Jody Schaaf. I am originally from Indiana and I am a very proud Hoosier having graduated from Indiana University. I currently live in Arlington Heights, Illinois with my husband and two daughters. I am a NICU nurse at Northwestern Prentice and have been there for 17 years.

JCF: What made you decide to become a NICU nurse?
JODY: Throughout nursing school, my intention was to be an adult ICU nurse. I’ve always LOVED babies though and decided to interview for the NICU as well as the ICU. When I went around the NICU during my interview and saw all the little cuties, I knew it was the place for me.

JCF: What does a typical day as a NICU nurse look like?
JODY: At 7 a.m., we huddle in the staff lounge with all of the day-shift nurses to hear what we should anticipate throughout our shift and any new news. Our assignment for the day is located outside the lounge. Then, we go to our assigned room and get a report from the night nurse.

Some days the assignment acuity is lighter and we are with babies who are feeding and growing. Other days include being an admission nurse for babies who are born at Prentice or transferred from an outside hospital. Then there are days of high acuity, which can be very intense. It is nice to get a combination of these different experiences.

The first is meeting special babies and their families and staying in touch with them long after their NICU stay. Some babies are in the NICU for many months, and the relationships established with their families are invaluable.

The second is my coworkers. I have made some of my very best, life-long friends in my unit, which makes coming to work that much better.

JCF: If you could give one piece of advice to someone looking to become a NICU nurse, what would it be?
JODY: It’s not always easy, but it’s always worth it. Also, expect to work every other weekend and holidays for many years to come.

JCF: When you’re not working, what do you enjoy doing?
JODY: I am very active in volunteering for my daughters school’s PTA. I coordinate activities for students and families in my community. I also love to go to my girl’s sporting activities. Spending time with families and friends, it never gets old.

JCF: What advice do you have for parents with children in the NICU?
JODY: Take care of yourselves so you can take care of your baby. Just like in a plane, you’d put the oxygen on yourself first in order to take care of others. So many things are out of your control, so make sure you control the things you can. Drink a lot of water, eat and get sleep. It sounds easy but it’s often the hardest thing for parents to do.

JCF: How was your experience as the Owl Give Award winner?
JODY: It was such an honor to be the Owl Give Award winner. The family that nominated me has become such a beautiful blessing in my life. We went from not knowing each other 8 months ago to being very close family friends after taking care of their baby in the NICU. Their kind thoughts and words were everything. This award was the cherry on top.

JCF: What makes the Owl Give Award meaningful to NICU team members?
JODY: It is very nice to be recognized. We work very hard for the babies and their families, which can often be very socially, emotionally and mentally fatiguing. We did not get into nursing or health care for recognition, but being recognized every once in a while makes it all feel worthwhile.

JCF: Why do you think JCF’s mission is important?
JODY: The NICU families have so many things to juggle. No family plans for a NICU stay, which can bring a lot of different emotional and financial burdens. Jackson Chance Foundation helps to relieve these families of this burden, which is amazing and so appreciated by the families.

JCF: How does JCF’s mission support NICU babies and their families?
JODY: I love to tell our new families about the Jackson Chance Foundation, the sweet baby it honors and the work his parents committed their lives and time to in his memory. The financial burden that is lifted off of these families is priceless. It is like you can feel a weight lifted off of their shoulders when they are first informed of the free parking passes available to them until the baby is discharged, whether it be five days or five months later.

Make an impact through JCF today.