You are here: Home / Alex and Diego

What Our Babies Needed That We Couldn’t Learn from a Book.

I was going to be the best prepared mom ever. I had read all the books and my husband’s reading list was something to put even Seth Rogen’s Knocked Up character to shame. My husband and I took the classes and even signed up both sets of grandparents. None of this could have prepared us for what happened next.

It was Week 27 of our pregnancy and my WebMD Pregnancy App alerted me that each baby was the size of a cauliflower head. In less than 24 hours, my water broke and our twin boys were delivered via emergency surgery. We were in shock. They weighed just over 2 pounds and the doctors told my husband that Twin B wasn’t breathing when he was born, but that the doctors and nurses successfully intubated both babies. Both boys were stabilized and made the trip to the Prentice NICU. We were told to expect to be there until their original due date – 90-100 days. 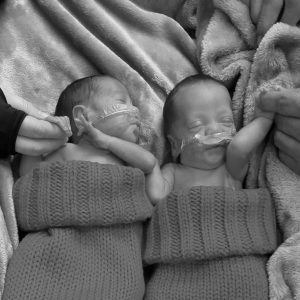 We loved celebrating firsts and we had so many in the NICU – first bath, first book, first outfit, first time they grabbed our finger, first bottle, first time breastfeeding, first Thanksgiving and even the first visit from Santa. But what we loved even more was being able to give our twins the things they needed – the things that babies who go home get all of the time – us.

Kangaroo care (a technique of holding your baby skin-to-skin which has been shown to improve recovery time) not only helped us bond, but was critical for their health and healing. When we held them after they ate, they were able to digest better. We saw our twins get stronger every day and we learned how to read their cues – when they were hungry, needed a diaper change, how they loved to be held and loved bath time. Our babies needed us to learn how take care of their special needs and the NICU nurses and doctors were our teachers.

Each day we wanted more time with them and found ourselves leaving later and later. There were so many ups and downs during our NICU stay, but not being there for those moments would have been heartbreaking. We felt the financial burden of traveling to the NICU daily and there was not a single other NICU parent we met that didn’t also feel that burden. One parent told of having to limit her visits to just a few days per week. Another parent talked of struggling to get onto the CTA and walking outside in the sub-zero weather while still recovering from having just given birth. At one point, I considered limiting my daily visits because of the rate increase at the garage.

In the end, we were so lucky to have spent every day with our twins during their 75-day NICU stay. We learned how to be the parents they needed because of the valuable time we spent with them and their doctors and nurses. There isn’t book or class in the world that could have given us the knowledge that we learned from being with our babies. Diego and Alexander finally came home happy and healthy at the 37-week mark and we know that our ability to be there helped them thrive.

I hope you will join me in supporting Jackson Chance Foundation this April. Every donation made will be matched dollar for dollar up to $25,000 until 4/30. If they reach their goal they will expand their parking program to the NICU at Northwestern Prentice Women’s Hospital. Click to make a donation.