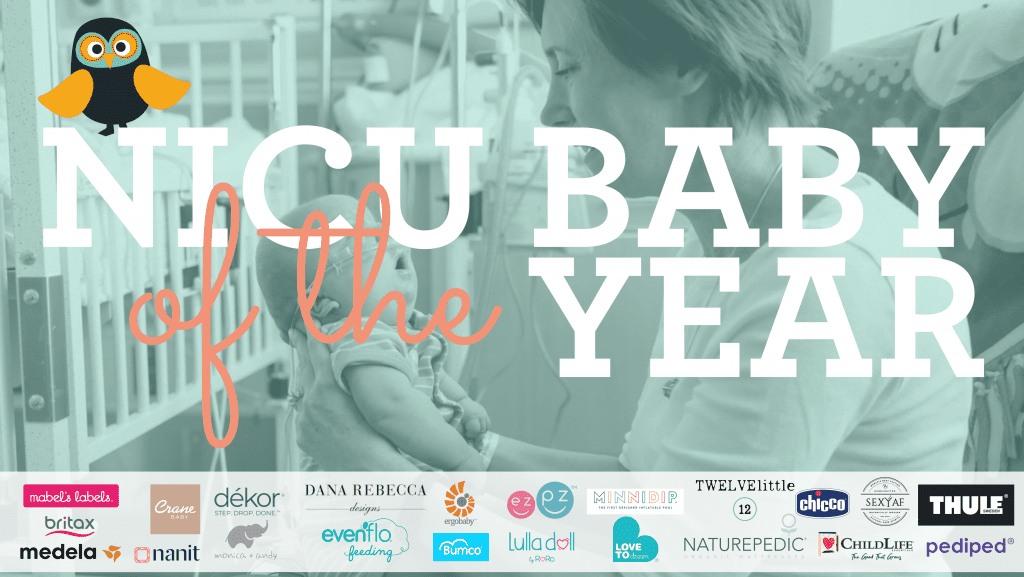 It’s been an exciting few months for Jackson Chance Foundation — we held our 1st Annual NICU Baby of the Year initiative! This initiative focused on highlighting and honoring all our tiny heroes’ journeys. We encouraged community members to share their babies’ journeys, advice, motivation and support for other NICU families. We partnered with over 16 brands to create a custom gift package, which included a house cleaning and $500 in groceries to stock up their fridge. Overall, we received 29 nominations from our community — each one inspiring in its own way. 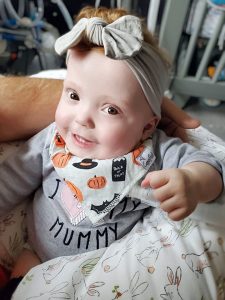 The winner was determined by the engagement their posts received on their personal social media pages. The nomination with the highest engagement and the 2022 NICU Baby of the Year is Eris Lee, daughter of Cayce and Dennis Lee.

We connected with the Lee family to learn more about their NICU journey and experience participating in our NICU Baby of the Year contest. Check out the interview below.

Eris’ Nomination:
Our NICU journey started with a one-pound, 1.3-ounce Eris arriving somewhere between 22–23 weeks’ gestation (17–18 weeks early) via emergency c-section. Eris is considered a micro-preemie, meaning she was born at the extreme front of the viability window. Due to Eris’ premature lungs and the 4 months of necessary intubation, she developed bronchopulmonary dysplasia, commonly known as Chronic Lung Disease of Prematurity. She was diagnosed with retinopathy of prematurity, she developed pneumonia four times, each occurrence causing her blood to go septic. During one of the more severe cases, Eris’ only option was to undergo ECMO treatment.

Eris spent a total of 254 days in the NICU across 3 different hospitals in North Carolina. She was born at Forsyth Medical Center, transferred to UNC Children’s Hospital, and finally graduated from Brenner Children’s Hospital. To go home, Eris left the NICU with a tracheostomy, a ventilator, and assistive oxygen to breathe. To eat, she required a gastronomy tube and feeding pump. Today, she’s 20 months old (16 months adjusted) and a healthy 20 pounds. She’s the happiest baby who loves laughing, clapping, dancing along to music, and playing with her puppy Charlie. Eris spends her days 100% off her ventilator with no oxygen support and is now taking more nutrition orally and depending less and less on her feeding pump. 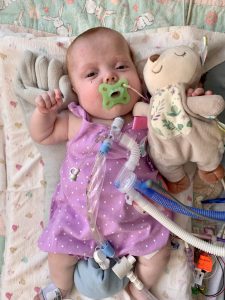 The NICU is an experience nobody imagines that they’ll go through, but once you have, you couldn’t imagine being who you are today without it. We found that if you’re one of the lucky ones who come home with your baby, you will come out the other side of the NICU stronger than you ever thought you could be. You’ll be ready for your next challenge, life after NICU, but you’ll be happy to face it. You’ll also find that your personal hero is a baby a fraction the size they should be but with twice the grit of a seasoned Roman gladiator.

Out of those three NICUs, parking was only validated at one. During those 8 ½ months, one of us would stay with Eris during the day and the other would come to the hospital after work, meaning the parking costs doubled. Figuring out how to afford to get to the hospital to see your critically ill child should be the least of NICU parents’ worries. Sadly that’s one of the rarely mentioned struggles you must face. That’s why our family couldn’t be happier to support Jackson Chance Foundation and the work they do to help NICU families overcome that financial barrier. Anything enabling families to spend more time with their little fighters and have one less worry is a cause we’re proud to be involved in.

Q: How did you hear about the NICU Baby of the Year?

A: Life after the NICU is such an enormous and wonderful milestone in every family’s journey, but it has its own set of trials. For us, that included our beautiful baby girl, a LOT of medical equipment (an entire 10’ x 10’ supply room of it), and a steep learning curve. Thankfully, in the age of social media, we were able to tap into a wealth of information via NICU parent Facebook groups to help us ease the transition. It was in one of those communities we first heard about the Jackson Chance Foundation and its mission statement.

It’s funny that we had never taken a second to think about how much we spent on parking during the 8 ½ months Eris was in the NICU. When we finally went back and added it up it was insane. We took for granted that we were financially able to get both of us to the hospital every day; that isn’t the reality for some families. We’re glad we had that moment of clarity and decided to get involved because no parent should wonder if they’ll be able to afford to see their child on top of all the other worries the NICU brings.

Q: Why did you think it was important to participate in NICU Baby of the Year?

A: When we saw JCF announce that they were holding a contest for their 1st Annual NICU Baby of the Year, we knew we had to nominate Eris. When you see our 20-pound baby girl with her big grin and curly, red hair, you’d never guess that there were times in her life that the doctors told us her odds of survival were the same as a coin flip or worse. We were terrified when Eris came into our lives a little over 17 weeks before her due date. No parent expects their newborn to end up in the NICU and for a long time, it seemed like nothing would go Eris’ way. 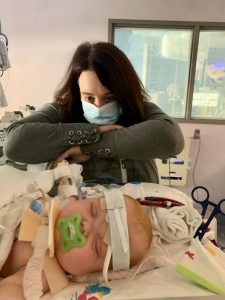 For weeks, in the beginning, she went through what seemed like endless blood draws and x-rays and all we could do was watch from beyond the glass. It’s crazy to think about it now because you wouldn’t know what she went through if you met her. When you start singing the ABCs and that little 20-month-old toddler starts going bananas, cackling and clapping, you don’t see a sick micro-preemie, but rather a wonderful, happy child without a care in the world.

If you’re going to survive as a parent with a child in the NICU, you MUST have hope. The truth is that you will lose some dice rolls but if you’re lucky, you’ll win some big ones too. That’s exactly how it felt all 8 ½ months with Eris in the NICU and if she can give hope to even one family, then her story was worth sharing.

Q: What is the one piece of advice you would give to a family with a child in the NICU that you didn’t know going in?

A: The piece of advice we’d like to pass along to any family that finds their child in the NICU is to make sure you take some time for yourself so you can be there for each other. We can only speak to the NICU journey from the perspective of our own, but we ask you to recognize that emotional fatigue is a VERY real thing. During the first few weeks, no parent will take this advice to heart, but when your sole concern is the welfare of your child, it’s easy to forget about the welfare of your loved ones and even lose your empathy for what they’re going through.

When your emotional health is in such a volatile state for a prolonged length of time it can even become a situation where you start lashing out at them. You MUST take time to step away from the hospital, even if it’s just to go eat and get some coffee. Figure out something you can do that is in all rights selfish, something just for you that you enjoy. Taking these small self-care breaks is vital to recharging your batteries and making sure that your family is communicating effectively and thinking clearly. Your baby is relying on your support as they face the challenges of the NICU, as well as your ability to make well-informed decisions and express them lucidly. Make the time to take care of yourself and although it may not feel like it in the short term, it will have lasting positive effects on your family and your baby.

Q: What is one thing you would want people to know about your experience? 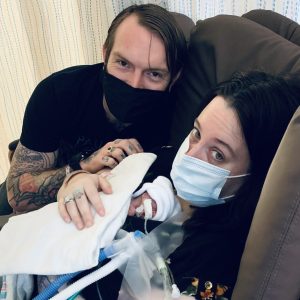 A: What we’d like to share about the NICU stems from the amazing support that we received from our friends and family during our experience. If you ever have a friend or loved one that ends up with their child in the NICU, there are some specific things that you can do to support them.

Having a baby in the NICU is emotionally exhausting and in that perpetual state of stress, it’s easy to stop taking care of yourself. Having friends and family go beyond a phone call (not to dismiss the importance of those, too) and step in to make sure that your needs are being met goes a long way. Swing by the hospital with some coffee, even if it’s just to share in your car and talk or take them out to lunch. All three hospitals Eris was a patient of had Starbucks and the gift cards we received from friends went a long way. If you are on a tight budget, it could be checking on them via text routinely and letting them vent. You could even offer to help care for pets that have taken a back burner, do some laundry for them and tidy up around their house, or use something that was instrumental to us, called Meal Train. A sibling of ours used it to create a schedule that helped our friends and loved ones coordinate providing us with much-needed healthy meals.

The main point is NICU families need someone to worry about them because they are only worried about their baby, usually to the exclusion of all else. It can be a long journey, so try and stay consistent with your support throughout its entirety. Without that continued support, we don’t know how we would have survived our own trial by fire that is the NICU.

Make an impact through JCF today.