You are here: Home / jerry azumah 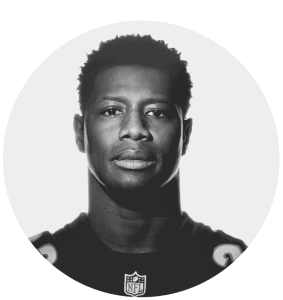 Jerry Azumah is a former American Football Cornerback who played seven seasons for the Chicago Bears of the National Football League (NFL). He played college football for the University of New Hampshire and was selected by the Bears in the fifth round of the 1999 NFL Draft.

Azumah is the first-generation American son of Theophilus and Bertha Azumah, natives of Ghana. He was born in Oklahoma, grew up in Worcester, Massachusetts and attended the University of New Hampshire where he was a four-year starter on offense for Chip Kelly. In 1999, Azumah was the first recipient of the Jim Urquhart Student-Athlete of the Year Award. This annual award is bestowed upon UNH senior student-athletes who excel both in athletic competition and the classroom, in addition to possessing sportsmanship, great character and passion for sports. During Jerry’s senior year, he was elected All-American and All-Atlantic 10 Conference while shattering conference and school season records with 22 touchdowns and 2,195 rushing yards. He also won the Walter Payton Award as the best offensive player in Division I-AA football. In his college playing career, Azumah set the Division I-AA career rushing record with 6,193 yards. He also set the Division I-AA record with 8,276 career all-purpose yards. In 2005, Azumah was inducted into the New Hampshire Wildcats Athletic Council Hall of Fame.

Azumah was selected by the Chicago Bears in the 1999 NFL Draft out of the University of New Hampshire. In Azumah’s first year with the Chicago Bears, he won the prestigious Brian Piccolo Award which is given to a Chicago Bear by his teammates to honor a player’s courage, loyalty, teamwork and dedication. Azumah, who was a running back in college, continued to make the transition into an NFL defensive back. As his NFL experience grew, he also saw time on special teams and special situations on defense. For Azumah’s career, he appeared in 105 games with 48 starts. He had 384 tackles, 10 interceptions, 29 pass defense, 6.5 sacks, 6 forced fumbles and one recovery.

Azumah retired from the NFL in March 2006 and has been seen on the Chicago Bears post game coverage and commentary on WFLD-TV, Fox Chicago and appeared weekly on Fox Chicago’s Good Day Chicago. Azumah started his television broadcasting career on Comcast SportsNet Chicago in 2006 as a post-game analyst and feature reporter. Azumah also worked for ESPN 1000 radio in Chicago in 2010.

Jerry became a board member of the University of New Hampshire Foundation in 2001. In the summer of 2003, he donated a six-figure gift to the Foundation which was directed to the University’s athletic department and as a result The Jerry Azumah Performance Center was created. In 2004, he started the Azumah Student Assistance Program (ASAP) – a charitable 501(c)(3) organization and provides scholarships for disadvantaged students that attend private, secondary education. As a retired member of the Chicago Bears Football Club, Azumah joined the Board of Directors of Bears Care in 2006, the philanthropic arm of the Chicago Bears. Bears Care was founded in 1989 and supports youth athletics, education, medical research and treatment programs for breast and ovarian cancer.

Jerry has two children, Santiago and Valentino, with his wife, Bianca, and they currently reside in Chicago, IL.